Formed at the beginning of 2017 by Paul Evernden and Angela Najaryan and performing initially as a trio with the pianist Jelena Makarova, Eos now exists as an ensemble made up of the two founding members, both Royal Academy of Music Alumni with a passion for both new and old, playing in different formations and alongside regular collaborators Thomas Ang and Pavel Timofeyevsky.

New music is fundamental to the group’s programming with recent performances for 2021 Concerts’ three day residency at the APT Gallery in Deptford including the second performance of Paul Evernden’s Carving No.2.

Future concerts include two Violin/Clarinet duo programmes at the end of 2018 as well as performing as a Clarinet Quartet in early 2019; April 2019 will see an appearance at Borough New Music Series where the group will perform again as a trio, giving the world premieres of new works by Daniel Figols Cuevas and Paul Evernden. 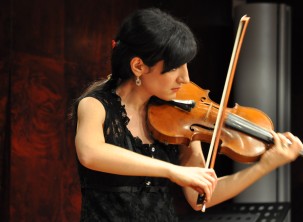 After initial studies in Violin at the Komitas State Conservatory, Yerevan, Armenia where she received the Red Diploma (Highest Honours), Angela was awarded a full scholarship to the Royal Academy of Music in London where she has performed with conductors including Sir. Colin Davis, Yan Pascal Tortelier and Ignat Solzhenitsyn, as well as being a regular member of the Academy Soloists, a string ensemble led by Clio Gould.

In 2001, Angela won First Prize in the inaugural Strings Contest for the wider Middle East organised by the Lebanese Ministry of Culture, performing in a Gala concert at the American University in Beirut.

Before coming to the U.K, Angela spent a year as First Violin in the Spendaryan State Opera and Ballet orchestra in Yerevan, as well as teaching for a year in the Tchaikovsky specialist music school.

Angela has been invited to participate in masterclasses across Europe, most notably the Ensemble-Akademie Freiburg, and in Salzburg with Thomas Rieble. Described as a “virtuoso violinist” by the Daily Telegraph, Angela has performed regularly in solo, choral and orchestral concerts at venues including the Royal Festival Hall, the Barbican Centre, Southwark Cathedral, Canterbury Cathedral, Shoreditch Town Hall and St. Paul’s, Covent Garden.

After studies at the Royal College and Royal Academy of Music, as well as at the Paris Conservatoire (CNSMDP), Paul Evernden (b1983) was awarded his PhD from King’s College London in 2013. Paul’s music has been heard at the Theocharakis Foundation and Megaron Concert Hall, Athens; Platypus V Marathon Festival, Vienna; 2011 and 2013 Tête à Tête Opera Festivals at the Riverside Studios, London; 2013 impuls Festival, Graz; 2010 Baketes Festival, Valencia; the Roundhouse, London, in a concert series curated by Rolf Hind; 2006 and 2008 Perpignan Contemporary Music Festival, France, and the 2008 Spitalfields Music Festival, London.

Recordings include for the Lorelt and Big Shed Music labels as well as on the Greek label, ekfrassis productions; in August 2015, Ekphrasis No.1 was released via digital download on Demerara Records.

Paul has lectured at the Odeon (the Athens Conservatoire) on ‘Music, Drama, Song: Monodrama and Music Theatre in Britain post-war to the present day’, and his article, “‘Place’ in Claudia Molitor’s Vast White Stillness”, was published by Noise & Silence, an alternative online magazine, in Summer 2016: https://noiseandsilencemagazine.com/2016/10/27/claudia-molitor-comment/